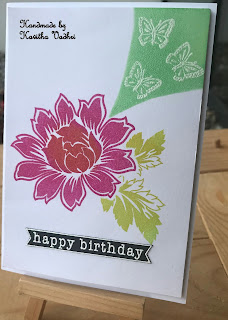 Hi all
Back with another card for AAAcard challenge.  I had bought these beautiful blooms stamps from Uniko on black Friday and wanted to use it. When thought of ink blending and card made in few minutes, i had no other choice except to stamp everything on white cardstock directly.  This card seems crazy idea but don't know.,I can't really resist the idea i get in my mind and will be happy if i execute it even though it turns out bad. I will have the satisfaction that i tried and then creating a space for another silly idea. Coming to my card, For the first card: 1.I had cut a cardstock to ink blend that portion with distress oxide pistachio after stamping the butterflies with versamark and heat embossed with white powder.
2.Then using a Misti i stamped the big flower with distress inks  2times by applying the ink on the stamp with a blending tool. It actually makes the process easy. The ink is spread evenly.  3. Masked the flower and stamped the flowers with distress ink ci…
1 comment
Read more 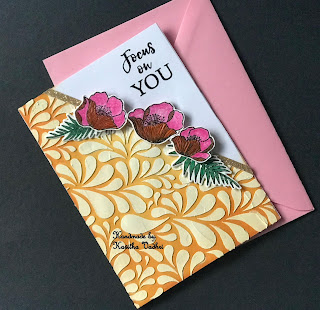 Hi all,
I have made a card using the stencil techniques from the class in Altenew Academy course. I do not have any embossing paste so i used texture paste instead. The stencil is from expressionscraft and the stamps are from Altenew. I started by ink  blending the portion of the cardstock by masking the top portion. I used marmalade distress ink. I added texture paste on to the stencil by masking the same top portion again. I added gold glitter paper on the edge and added few flowers which are clear embossed. I applied 3d modpodge to get some dimension on the base of the flowers which doesn't show up much in the picture. I stamped the sentiment and clear embossed it.  This is the first time i used the texture paste on a card. I colored the flowers using Carandache pencils.I have done something new because of the course. Thanks to Laurel Beard for the encouragement in the videos. I finally tried it. 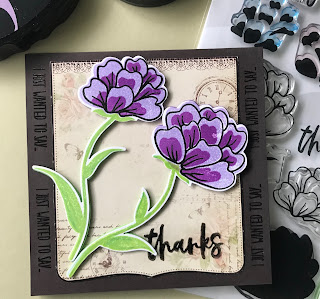 Posting my work after a long time.I recently joined in the Altenew Academy certification program to get inspired by many artists around the world and improve my cardmaking skill. I hardly get time now a days as we are moving to our home country after many years. I am in the middle of packing the stuff but as i am very excited to join the program and do not want to miss the opportunity, i have started with level 1 course in AECP

Card 1:I started by learning about layering the stamps. The videos make the stamping with layered stamps so easy. I was very scared to stamp initially before joining in the program but now i feel its all in the practice which makes it simple. My first card is made using PLAYFUL BLOOMS stamp set. I have used a pattern paper which is the one i got for stamp packaging. I do not remember the name but i saved it from long time to use it and i finally got the chance. I stamped on the sides with versamark ink which says I just wanted to say  and embossed with c…
1 comment
Read more 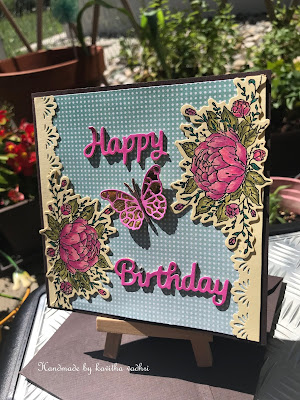 Hi all Made another card using the rose dies and punches. Here are the steps 1. It is a square card, die cut the roses and colored using water color pencils. Placed diecuts so it covers the punched portions .  2. Diecut pippi butterfly from memory box and covered it with gold pattern paper.  3. Die cut the sentiment 4 times so that it gives some dimension and lastly added a rhinestone.

Linking to seize the birthday challenge 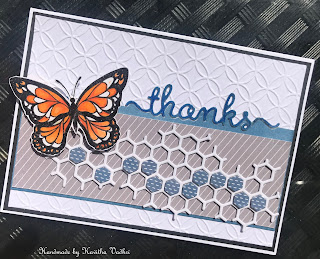 Hi all Made few cards before going on vacation. I saw a sketch at Freshly made sketches and wanted to play along. I also saw the colors at color throwdown and wanted to combine two of them. Here are the steps

1.First i embossed the white cardstock with Darice embossing folder.
2. Stamped a butterfly, colored using CARANDACHE water color pencils ,heat embossed using clear embossing powder .
3. I distressed a blue cardstock using faded jeans as i donot have the color mentioned in the challenge.I die cut word thanks and clear embossed.I diecut the word such that it still is attached to the cardstock.
4.Then diecut honeycomb pattern 3 times for dimension and with foam dots pasted the hexagonal pattern which is cut from pattern paper and all is pasted on the grey pattern paper.


Linking to
1. Freshly made sketches 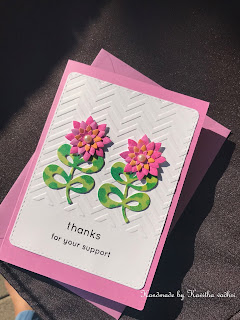 Hi all
Made a card using the inspiration photo from Paper smooches June challenge. I had thought of  the daisies and chevron after seeing the spikes of pineapple. Here are the steps for the card 1. Diecut the white cardstock using stitched rectangle die.  2.Embossed more than half of the card with chevron embossing folder.  3.Distressed a cardstock with rasberry and mustard seed and diecut daisies.For the leaf i used paper smooches loopy leaf die which was actually found in my scraps. I think i was supposed to do a background with distress inks green and yellow followed by stenciling of the pattern ,which i did not like and i thought of cutting the leafs instead of throwing. Finally put in to use now.  4. Sentiment is from the hope stampset which is also from Papersmooches. I remembered that i won this stampset in the challenge by savanaah long back , i recollected only when going through old posts as i started crafting after 4 yrs now.   Linking to Papersmooches june challenge
Happy…
2 comments
Read more 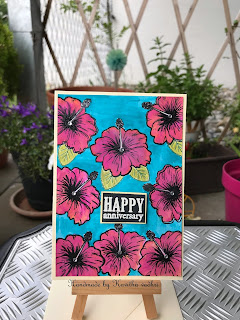 Hi all
Made my first masking card. It seems challenges make me think more and active. So thought i would participate more often and try new techniques even though i feel my stamping is pretty basic. Now that i gradually feeling good when stamping(no fear) ,i wanted to try out more.
Here are the steps for the cardmaking 1. I stamped the hibiscus (mudra stamps from India) randomly with versafine black ink and heat embossed with clear embossing powder and started wetting the paper followed by coloring with watercolors.  2. Stamped the leaves with versamark and heat embossed with pearl green embossing powder.  3. I found that after coloring my flowers were not as bright as they were first before coloring so tried stamping again with versafine and clear embossed. As i didnot have MISTI it was hard to stamp properly as my cardstock also curled up with coloring but finally stamped properly except two which you can see in the card.  I would have thrown the card in my scraps if i had not hea…
3 comments
Read more
More posts 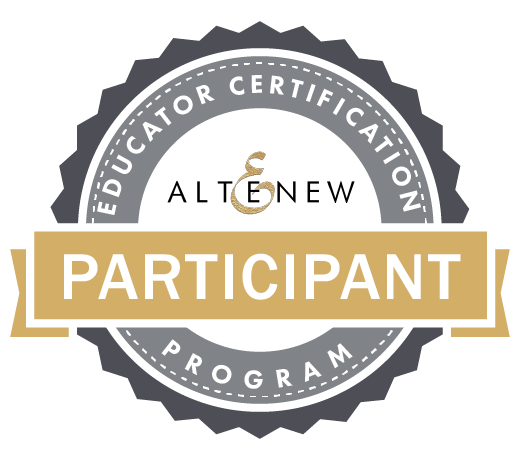 come and lets learn something 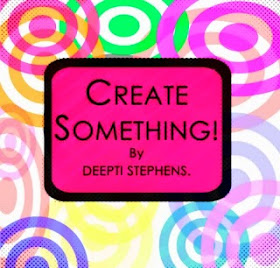 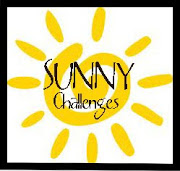 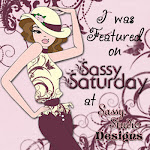 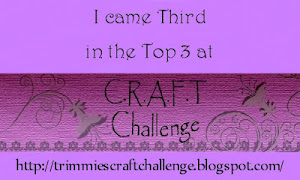 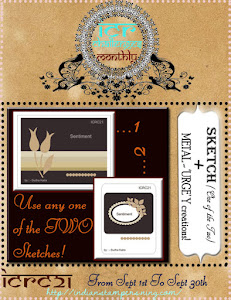 For Challenge31, Peace,Love and Happiness 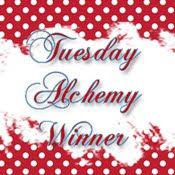